Kep up to date with the Latest from RONCO Omaha 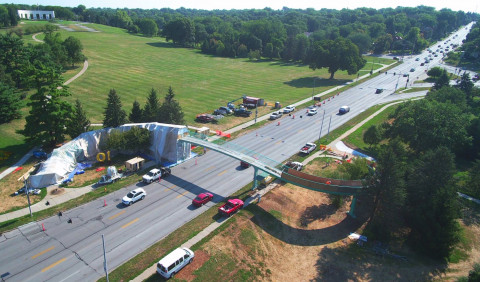 Originally constructed in 1965, this historic landmark of Omaha which connects UNO's Dodge Street Campus and Memorial Park is undergoing a complete restoration.

The structure which was awarded the title of most beautiful bridge in the special category by the American Institute of Steel Construction in 1969 will be completely restored to its original character. The improvements include encapsulating and sandblasting the lead paint, re-coating the entire structure with a multiple part paint system, deck patching and replacement, abutment and pier repairs, steel replacement, and finally a new pedestrian wear surface. The project is a joint effort between the City of Omaha and the Friends of the Bridge Group who helped raise a portion of the money to help fund the project. The project is scheduled to be completed by late summer 2017.

Blackstone Depot Project Underway
The Bull and The Bear